The Copernicus Sentinel-5P (S5P) data is available (here) for download since July 2018 to monitor air quality and changes in ozone over Antarctica. The TROPOspheric Monitoring Instrument (TROPOMI) is the single sensor on board of the S5P satellite. The S5P is the first of the atmospheric composition Sentinels (operational satellite missions supporting the Copernicus programme), launched in 2017, for a nominal lifetime of 7 years. S5P, is a gap-filler and a preparatory programme covering products and applications for Sentinel-5. The S5P mission will fill the gap between the end of the Ozone Monitoring Instrument (OMI) and SCIAMACHY exploitation and the Sentinel-5 mission (credit: ESA).

This high spatial resolution data is useful for air pollution to locate origin of key pollutants (trace gases such as sulfur dioxide in the atmosphere) and finding pollution hotspots. Measurements of atmospheric ozone from the Copernicus S5P satellite are now being used in daily forecasts of air quality.

List of Sentinel-5P level 2 products are show in the table (credit: KNMI): 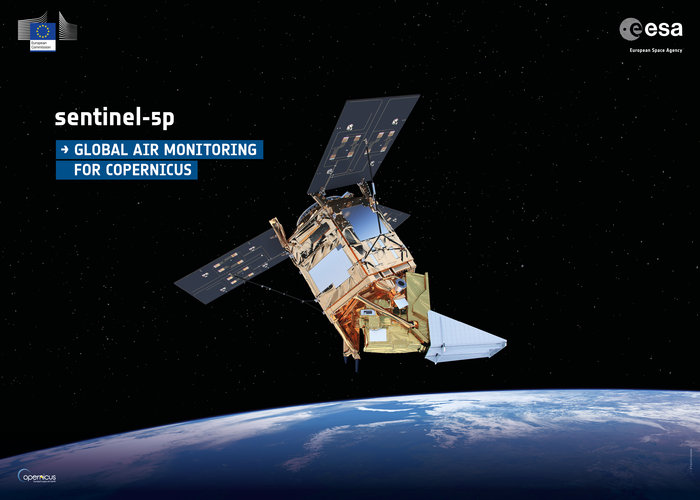 The S5P data in “pre ops”  phase can be downloaded from the scihub https://scihub.copernicus.eu/ . I downloaded a level 2 NO2 file in netCDF format (.nc files).

The browser shows contents (variables) of the netcdf file.

The user can easily create a line plot.

One added value of Copernicus Atmosphere Monitoring Service (CAMS) ozone products compared to satellite total column retrievals is that CAMS provides 3D global fields. This allows structures like the Antrctic ozone hole to be viewed in a different way. This animation shows a cross section of the ozone layer (in partial pressure) over the South Pole from 1 July to 25 November 2018 and illustrates the development and recovery of the ozone hole.

The reduction of ozone concentrations in the stratosphere and the formation of the ozone hole each year are caused by complex meteorological and chemical processes. Changes in the ozone between 7 July and 22 November 2018 are displayed here as a 3D rendered animation.

What a beauty can be found in NO2 animated map. Thanks to @CopernicusECMWF for their forecast. Look closely, even oil platforms are clearly visible. pic.twitter.com/70v35zeOPt

It’s #WorldEnvironmentDay and we’re looking at air pollution and how satellites like @CopernicusEU #Sentinel5P can be used to measure it! Explore this global map of Nitrogen Dioxide emissions and see how your country is doing here: https://t.co/0TwnGKWmhN #BeatAirPollution pic.twitter.com/rlB83gbRRc

We’re in Milan for #LPS19 and the latest science from Europe’s Sentinel satellites… like the new #Sentinel5P, which returns daily views of pollution. It shows nitrogen dioxide, mostly from fossil-fuel burning. This is data averaged for March 2019. pic.twitter.com/H2xXJZaNFX